Abstract: There is a growing interest in eye tracking as a research method and technology in many communities, including the visualization research community, but also in computer graphics, human- computer interaction, applied perception, psychology, or cognitive science. Progress in hardware and the reduction of costs for eye tracking devices have made this analysis technique accessible to a large population of researchers. Recording the observer’s gaze can reveal how dynamic graphical displays are visually accessed and which information are being processed. Such gaze information is available in real time so that eye tracking plays a role as a means of providing quick responses to user interaction and viewing behavior, supporting gaze-contingent displays and visualization. However, the analysis and visualization of spatiotemporal gaze data become challenging factors in this emerging discipline. I discuss the relationship between eye tracking and visualization from two angles: (1) How can eye tracking help understand how users work with visual interfaces, thus serving as a basis to improve computer-based visualization? (2) How can visualization facilitate the analysis of gaze recordings? I argue that it is useful to combine both perspectives, targeting VIS4VIS (visualization for visualization).

Bio: Daniel Weiskopf is a professor and co-director of the Visualization Research Center (VISUS) and acting director of the Institute for Visualization and Interactive Systems (VIS), both at the University of Stuttgart, Germany. He received his Dr. rer. nat. (PhD) degree in physics from the University of Tübingen, Germany (2001), and the Habilitation degree in computer science at the University of Stuttgart, Germany (2005). His research interests include information and scientific visualization, visual analytics, eye tracking, computer graphics, and special and general relativity. He is spokesperson of the DFG-funded Collaborative Research Center SFB/Transregio 161 “Quantitative Methods for Visual Computing” (www.sfbtrr161.de), which includes eye tracking as a quantification approach, and he is co-initiator of the workshop series on Eye Tracking and Visualization (ETVIS, www.etvis.org) and one of the technical program chairs ACM ETRA 2020.

Talk 2
Title: Why Topology is Necessary at Exascale - And Why it's Not Easy
Speaker: Hamish Carr

Abstract: As computation scales to exabyte levels, humans are increasingly unable to process the data directly. In a realistic assessment, a human might meaningfully perceive 10 GB of data in a lifetime, which requires billion-fold data reduction without information loss. As a result, techniques like computational topology, with mathematically well-founded approaches, become increasingly necessary to analyse and display (i.e. visualise) extreme data sets. However, much of the mathematics on which these methods are based is either linearly defined or couched in serial metaphors. As a result, one of the major challenges to exascale comprehension is now the ability to scale computational topology to massive hybrid systems using both shared-memory and distributed parallelism. This talk will therefore give an overview of the basic ideas behind computational topology at scale, and illustrate recent approaches to scalability.

Bio: Dr. Hamish Carr is a Senior Lecturer in the School of Computing at the University of Leeds, having earned his PhD from the University of British Columbia in 2004. His research centers on computational topology and the mathematical foundations of scientific visualization, but also includes applications ranging from civil engineering to environmental sciences. He is a member of the IEEE, ACM and Eurographics, and currently serves as Corporate Secretary for Eurographics. 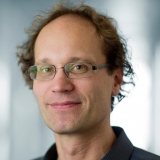