Abstract: Children and youth are at a greater risk of concussions than adults, and once injured, take longer to recover. The risk of a repeat concussion during recovery is also significantly higher, with subsequent injuries further complicating and prolonging recovery. The increased incidence of sports-related concussion in youth and the potentially serious long-term negative impact on their developing brains has enormous repercussions. Yet, little is still known about the subtle and widespread changes in the brain and the effect of concussion on the developing brain.

My team has been collecting resting state EEG in adolescents with sports related concussion for the past few years.  Probing the brain during the “resting state” has emerged as a powerful tool to map the functional organization of the brain.  Analysis of resting state functional networks has emerged as a significant new way to investigate brain connectivity between regions that are functionally linked in both healthy and disease/injury states. We were the first to report significant differences in functional networks in the frontal regions of the brain in adolescents with concussion using resting state fMRI. Importantly, this work showed that functional connectivity measures derived from resting-state EEG signals support the fMRI findings, showing clear concussion related changes in local networks in the dorsolateral prefrontal cortex that subserve cognitive function in adolescents.  This work established that resting state EEG signals provide a simple, low-cost, non-invasive and direct measure of brain connectivity that differentiates healthy controls from individuals with brain injury.

Using this data, we have recently started developing a Recurrent Neural Network to classify concussion from raw 64-channel EEG time series signals. The network has been trained and tested on an EEG dataset obtained from male, adolescent athletes with subacute, sports related concussion, bench marked against healthy peers of similar age and physical condition. In blind tests with this dataset, our network successfully classifies concussions with an accuracy consistently >$95%. In my talk, I will discuss these findings and the challenges of classifying concussion in the context of brain development. 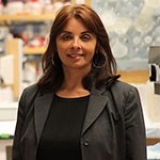 Director of the Perception-Action Lab, UBC

Dr. Virji-Babul is a Neuroscientist and a physical therapist.  She is currently an Associate Professor in the Dept. of Physical Therapy, UBC. Her laboratory is based at the Djavad Mowafaghian Centre for Brain Health.  Her research addresses fundamental aspects of brain-behavior relationships in typical and atypical development.  Over the past decade, she has adopted a cognitive neuroscience framework using a variety of neuroimaging tools, from magnetoencephalography (MEG) and high-density electroencephalography (EEG), to diffusion tensor imaging (DTI) and functional magnetic resonance imaging (fMRI), to unravel and examine the structural and functional brain networks underlying perception and action.  This work has resulted in over 60 peer-reviewed papers in the area of neuroimaging, brain dynamics and perceptual-motor function in typical development, atypical development and in adolescents with concussion/mild traumatic brain injury.