With the recent advances in AI, more AI-powered interactive systems have been designed to support people in various everyday tasks. The tension arises, however, when we apply state-of-the-art AI technology to a real-world task without careful consideration of users and their context. I argue that human-AI interaction should be considered a first-class object in designing AI-powered systems. In this talk, I’ll present a few novel interactive systems that use AI techniques to support everyday tasks such as learning, data analytics, and group discussion. I’ll discuss how human-AI interaction is considered in these systems, what tensions we encountered and how we addressed them, and how to design better intelligent and adaptive systems for real-world use. I'll also share preliminary lessons from teaching my ongoing Human-AI Interaction course and designing interactive exercises for it. 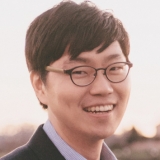 Juho Kim is an Associate Professor in the School of Computing at KAIST, and directs KIXLAB (the KAIST Interaction Lab). His research in human-computer interaction focuses on building interactive systems that support interaction at scale: crowdsourcing and human computation, online education and learning at scale, civic engagement and collective action, and interactive data analytics and mining. He creates interactive and collaborative technology that empowers conventionally passive populations—students receiving instruction and citizens influenced by social issues—to be active and self-directed participants who initiate deeper learning and collective action. He often takes an interdisciplinary approach to his research, by connecting computer science with learning sciences and social sciences, and aims to deploy interactive systems to real users.

He earned his Ph.D. from MIT, M.S. from Stanford University, and B.S. from Seoul National University. In 2015-2016, he was a Visiting Assistant Professor and a Brown Fellow at Stanford University. He is a recipient of KAIST’s Songam Distinguished Research Award, Grand Prize for Creative Teaching, and Excellence in Teaching Award, as well as 12 paper awards from ACM CHI, ACM CSCW, ACM Learning at Scale, ACM IUI, ACM DIS, and AAAI HCOMP.